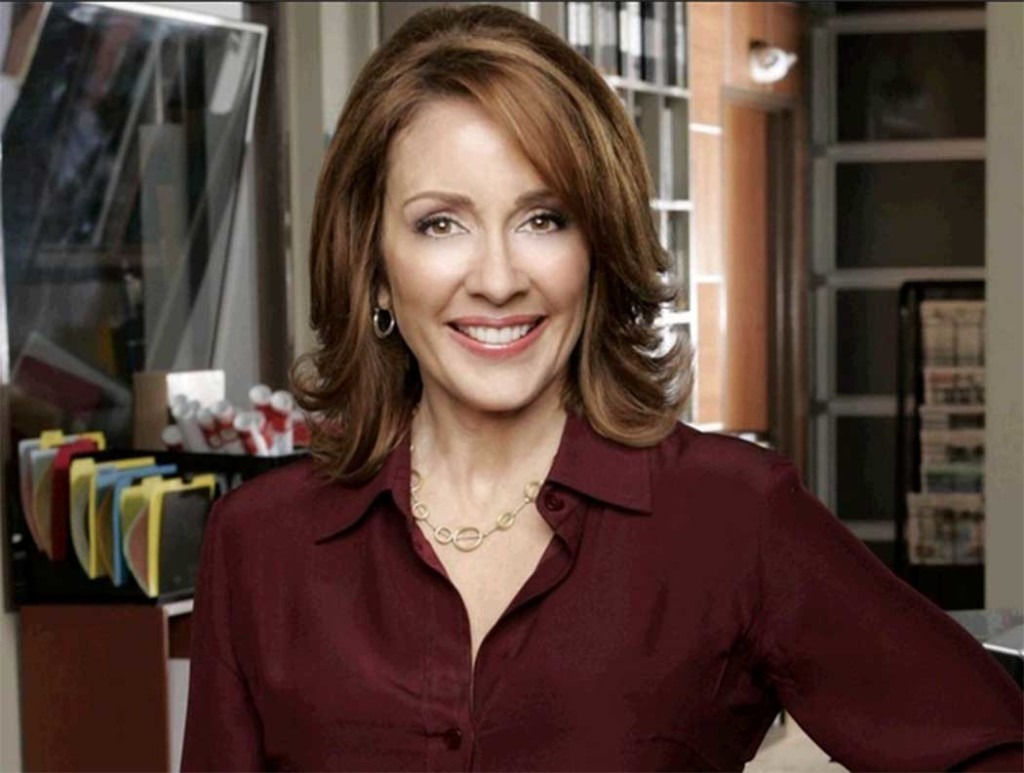 When I reflect upon interviews done here on Mind Your Body, I can’t remember when I’ve been so engrossed in an interview and the celebrity has said, “I need to go block a scene and I’ll call you right back.” And she did, and we got right back into the meat of our conversation, which was very meaty. Talking to Patricia Heaton was just so fun.

Of course on Wednesday nights, you are watching her play Frankie Heck on ABC’s sitcom, The Middle. The character is a working-class, middle-aged, Midwestern super mom. Frankie works hard, just like Patricia always has, balancing family and career.

Let’s review Patricia’s rockin’ resume here. Who could forget her as Debra Barone on Everybody Loves Raymond? I sure can’t, because we loved Debra, too. Patricia won two Emmys, had seven nominations for same, and won other awards, too. She starred opposite Kelsey Grammer in Back to You, and in Hallmark’s Front of the Class.

Don’t forget other TV appearances in thirtysomething, Miracle in the Woods and The Engagement Ring, plus films such as Beethoven, Space Jam and more. She wrote a New York Times bestseller, Motherhood and Hollywood—How to Get a Job Like Mine. She and husband David Hunt own FourBoys Films, and they have four sons. Follow Patricia, who’s 56 now, at @PatriciaHeaton where she says she’s a lady actor, bourbon lover, boy breeder, and sparring partner to @huntyboy1966 (not necessarily in that order). Yes, she is!

Patricia, how do you Mind Your Body with what you eat? You live in the land of “diet of the month.” And you look great, for sure!
I’m an actress, so I’m always looking for new ways to try and torture myself. I’ve been doing a sort of Paleo thing, cutting out all sugar and “bad carbs” and eating low-fat foods. I read about Soylent, a nutrition drink you can use instead of meals. You mix it with powder and water and add fish oil, for 100 percent of nutrients a day that are in perfect balance. Each pack is 2,000 calories, which is a lot, so I split it into two days’ use. If you’re so busy like me, it eliminates the need to grocery shop and plan for that. It’s just easier to drink a drink. On the days when I do it, it gives me an incredible sense of well-being.

What do you do for exercise, Patricia?
I hate to exercise. I’d rather sit on the couch and read a book, or watch TV. I live in Los Angeles, so I can walk around the Hollywood Reservoir. I get on my stationary bike, use my skiing machine, and I do ski in Montana. It’s great exercise. I’ve never really been an outdoor person until I saw that state. I’m also using an app I downloaded that gives me an intense workout in just seven minutes.

What do you wish you could do for exercise?
Watch The Walking Dead and burn calories.

What bad health habit would you like to ditch for good—maybe one you’ve wanted to lose for a while?
It would have to be Web surfing and filling my head with total, useless crap. I mean, I have books next to my bed that I want to read. Web surfing is a problem. I’ve prayed about it.

How does being in entertainment and the “public eye” affect how you take care of yourself?
Recently I took my son for a college tour in the Midwest, and I abandoned Soylent and that app. I ate what I felt like eating. I realize if I was still living in Ohio that I’d be 30 pounds heavier and an alcoholic. There’s something about being there that makes me want to drink beer all day, eat cheese fries, and eat stuffed French toast for breakfast. Being an actress helps me maintain my health. It’s because I fear never working again if I don’t look good, so there’s motivation, and a very real pressure to be disciplined because I have to be on TV.

On The Middle, what do you have in common with Frankie? You are both from the Midwest, after all, but what else?
I really relate to her sensibility in that I didn’t start making my living in Hollywood until my 30s. It’s not like I grew up around this. I still feel more attuned to my Midwest roots and I really understand her. I really do love her and I think all moms have the same kind of feelings regardless of where we live or the circumstances. We worry most about our kids or doing the right thing as moms, giving them what they need, and hoping we don’t make too many mistakes. In that sense, Frankie is “every woman.”

But you still worry about the next job? I think that’s common in your business—maybe in a lot of businesses!
Yes, even though I’ve been doing a lot of shows for many years. Even as you’re working you know you’ll lose that job because shows never last more than five to seven years. That always feels very present—it’s what the Hecks have to deal with every day: How are we going to make it to the next paycheck?

Are you a “Super Mom” in real life? Why or why not? And how’s being married for so long?
Well, I do have four sons—one away at college, three at home, with one working and two in high school. My husband and I just celebrated our 24th wedding anniversary and I love him very much. Marriage is a really wonderful thing, but as hard as I had to work to get where I am professionally, I’ve had to do the exact same thing in marriage. It’s tough to be with one person for the rest of your life, when you both grow at different rates and in different directions. You have to figure out how to grow differently “together.”

There’s a misconception that romance you had when first married is supposed to be there all the time, or that’s a sign the marriage is over or that you no longer love each other. When things get tough, you have to be able to withstand the pressure. I’m a big proponent of marriage counseling. You have to know yourself and how you respond to things, and that’s where therapy really helps. If you can’t afford therapy, there are plenty of excellent books that tell you many of the same things.

Are you setting good examples for your kids and their lifelong healthy habits?
Even if they don’t eat that well, they’re eating better than I did as a child, and God bless my mom. Breakfasts was Pop-Tarts and Tang. I don’t like to nag, or start the day out yelling at anyone because of what they don’t do. We have to figure that kind of thing out. For example, one of my sons doesn’t like to get up, so we’ve said ‘You have to set an alarm and we’re not going to wake you up any more—you’ll have to deal with the consequences.’ It’s working.

And we sometimes pick up prepared food, but not bad, processed food. It’s good food, and when we’re in a hurry or tired, it works.